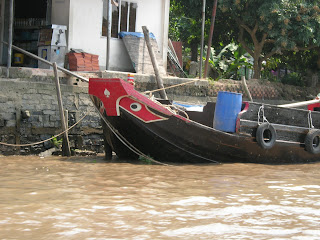 They were my seatmates on the flight from Taipei to Phnom Penh, Cambodia – an American couple from the enormous Cambodian community in Los Angeles. In preparing for my trip, I had read much of these young Asians whose families had escaped from Cambodia and Vietnam in the late 1970s. This next generation was starting to revisit their native country to connect with their roots. The wife actually remembered, as a child of four, her family’s escape to Thailand in 1979. They walked hundreds of miles, stopping for food at night and sleeping under trees. Her most vivid memories were of the times they had to run because of gunfire and her uncle would pick her up and carry her. None of her relatives that stayed in Cambodia survived.
On our bus from Siem Reap to Phnom Penh was an American Cambodian from Washington, D.C., who had immigrated from a Thai refugee camp after escaping the Pol Pot regime. It was the first time she had been back and the first time to meet her grandparents. It was strange seeing this very American girl and her very Cambodian parents and siblings. She was quite helpful in translating all of the action by the bus driver, especially when we pulled to the side of the road and sat while he yelled on the phone with somebody. (We had apparently left a passenger stranded 10 minutes back and the company wanted him to return. The entire bus booed that idea so we kept going.)
These stories brought back memories of the five or six Cambodian families who were sponsored by churches in my hometown in 1980. At the time, I truly had no idea what they had been through but was made painfully aware of their trauma when we visited School Number S-21 in Phnom Penh. It was used as a prison and torture facility during the Khmer Rouge. Of the 10,000 people who passed through the prison, only seven survived. One fourth of the population of Cambodia died under Pol Pot and the Khmer Rouge. Gruesome stories were the norm. 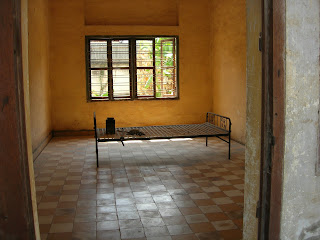 It was only four years of such oppression, ending in 1979, but Cambodia is only beginning to heal. It is becoming stable enough to benefit from the large tourist industry. Siem Reap, home to the incredible ruins at Angkor Watt, is the first city to provide the hotels, restaurants and transportation necessary to attract visitors.
In Vietnam, one million South Vietnamese escaped by boat after the fall of Saigon in 1975, and many immigrated to United States. For that we should be grateful. As a group these families have been enormously successful in their adopted countries. Thirty years later it is their children, educated in the Western world, who are interested in returning to Vietnam to learn of their past and to create business opportunities. On a two-day tour of the Mekong Delta, I praised the English of one of the tour members only to discover he was an American, living in Portland, Oregon, and with his family owns five Vietnamese restaurants. My comment was embarrassing for me, but he got a good laugh out of it. He helped us identify many of the unfamiliar fruits and vegetables we saw for sale, especially on the world’s largest floating wholesale market. This armada of produce laden boats served farmers dropping off their products, and restaurants and stores buying in bulk. We could only gape at this unusual distribution method. We were not happy to learn from our Portland Vietnamese friend of a recent outbreak of Asian bird flu that had killed many ducks in the very town where we found ourselves. Sometimes ignorance is bliss. 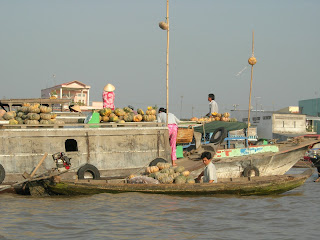 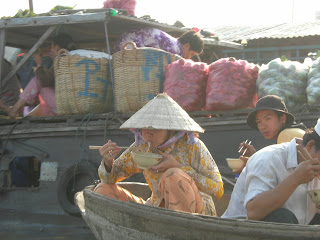 Vietnam suffered through some years of trying to make a communist economy work. Fortunately, their leaders decided in 1986 to test out a freer market and the economy is now booming. Yet the cost of living has remained low. Our hotels in Vietnam ranged from $5 to $12 a night and most of our meals were under $3. With a population of 150 million and 95% literacy, Vietnam is poised to become a dominant player in that part of the world.
Late in the trip, I met a Vietnamese American airplane mechanic with Boeing in Wichita, Kansas, who escaped Vietnam by boat when he was two-years-old. His two-month-old sister had to be left. He was painfully aware that there was a discussion of whether to bring him with the family when they departed. A different decision would have given him a totally different life. But he is now very committed to helping his family that remained in Vietnam and making sure his children are comfortable with their heritage. This is the consistent attitude we found as these children of those who fled Cambodia and Vietnam are making their first round trips, not to stay, but to help.

One Response to “Revisiting Cambodia and Vietnam”