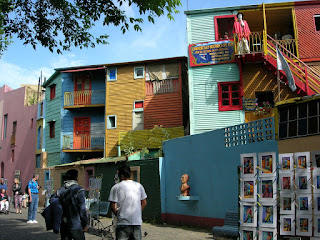 Buenos Aires is best known as the city of the Tango in the land of the Gauchos. Throw in a fist full of art though and you’ve got a big Ft. Worth down under. B.A. has cowtown’s wonderful juxtaposition of creativity layered on a cattle society. On a beautiful spring afternoon in November, I set out to discover this interesting art world.

The first stop was the Museo Nacional de Bellas Artes, the national museum with several floors of art works from around the world. I was encouraged to go directly to the second floor by an American student studying Hispanic art. She described it as the history of art in the western world revealed through Argentinian artists and subjects.

The floor began with landscapes and portraits typical of the 17th and 18th centuries. Horses and the “campo” or country were popular subjects. I particularly liked the Gaucho series by Bernaldo de Quiros who painted in the early part of the 1900s. But what’s an Argentinian gaucho in lace pants doing in an impressionist painting? This new subject in a recognized art era was startling but allowed renewed appreciation of impressionism. Peasants and workers are revered by Latin artists as represented by a poignant painting of an old woman feeding pigs in La Comida de los Cerdos by Fernando Fader. A colorful scene of breathing factories and straining dock workers by Quinquela Martin shows great sympathy for those who suffered through the industrial age. Italian last names of many of the artists reflect the huge Italian immigration to this country. The art progresses into the modern age with an unusual depiction of the Annuciation. An inflated, elongated Mary is visited by a puffy, highly feathered angel! I’m sure there was more wonderful art on other floors but the second floor is the jewel.

The museum hopping continued with the Malba Museum, built in 2001 to house the modern art collection of its director, Eduard Constantini. It is dedicated to expanding that collection but also promoting contemporary Hispanic artists (although there was a featured movie of Andy Warhol on my visit). Its permanent collection contains works by Freida Kahlo, Diego Rivera, Roberto Matta, and others. Regular exhibits and movies encourage the younger artists. Add in a sleek café and it’s a required stop for any visit.

There’s more at The National Museum of Decorative Arts. But what’s a museum to do with such a dull sounding name? The first suggestion is to be housed in an elegant former home built around 1915 in the French Neoclassical architectural style. The second idea is to fill the home with period European furniture, tapestries, paintings and sculptures to give the viewer a sense of the life of the rich when Argentina was also wealthy. And, finally, leave the Great Hall almost empty to allow one to imagine a room full of music and dancing. This place was a lovely surprise.

Now, I’ve checked off the major museums and am wondering if that’s all there is to the art world of Buenos Aires. Oh, no, the best is yet to come – from the streets – on Sundays.

La Boca (the mouth of the river) is the home of many artists and the passionate Boca Junior soccer team (I suppose all soccer teams in Argentina are passionate). Its aging stadium gives shade to this small community located in an old warehouse district. On a Sunday afternoon, the streets fill with booths of artists, tables and chairs to relax and eat, and best of all, spontaneous tango dancing. 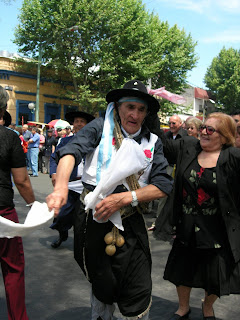 An often overlooked street fair is the Feria de Matadores, also held on Sundays. It originally was the country fair for farmers to sell their produce, honey, and jellies. There are also a lot of equestrian products, including silver spurs and belts. In late afternoon a horse event provides drama as riders grab a ring while standing on a galloping horse. Again, though, it was the street scene that charmed. Gauchos dance the traditional handkerchief dance by selecting women in the crowd to join them. Sidewalk cafes offer the famous parrillado (grilled meat) perfectly complemented with Argentina red wine. And families and friends walk arm in arm in the streets. Our lunch group included two retired Argentina lawyers of Italian descent and their ballerina daughter and my cousin and her husband. We talked about books, politics and opera. What a great way to pass a Sunday afternoon.

I haven’t even mentioned the crafts fair often held outside the Recoleta cemetery, the artistry of the stylish Argentinian women, or the antique area of San Telmo displaying the talents of silversmiths of the past. An entirely different subject is the European ambiance created by B.A.’s architecture. What a feast for the eyes. For a fresh look at art history and at the soul of Argentina, don’t miss the art of Buenos Aires. So, until the next column, remember “All you really have to pack is your passport and money. The rest you can buy.”